The Name of God

You Do Not Know What Manner of Spirit You Are Of

Whom Do They Say That I AM?

Tikvah BaMidbar is a Messianic Fellowship that is made up of both Jewish and Gentile believers in the Messiah Jesus. Our purpose is to provide a place for Jewish people to learn from their own Scriptures that their long-awaited Messiah is none other than “Yeshua” (Jesus).

To the non-Jewish believer in the Lord, our Fellowship provides a place where you can learn the Jewish roots of Christianity and enhance your understanding of God’s Word.

To the unsaved who visit our fellowship, the Gospel is always given and explained. We are truly blessed by our Lord, for many have come to know “Yeshua” (Jesus) as their Messiah, Lord and Savior over the years.

It’s sad that many people who hear about Tikvah BaMidbar respond by saying, “Oh yeah, that Jewish thing!”

We teach the Jewish roots of Christianity through the following:

“Israel in Prophecy,”
“Messiah in Prophecy”
“The Feasts of Israel”
“Jewish Perspectives of God’s Word”

These teachings (that make up three-fourths of the Bible) demonstrate that Tikvah BaMidbar is not only a Jewish thing; it’s a good thing because it’s a God thing!

This aberrant theology is for the most part due to the lack of sound teaching on eschatology and their confusion between Law and Grace.

We are not Torah observant; our only authority for Truth is the Word of God.

We think that you’ll enjoy our teaching, our messianic music, and the small portion of tradition attached to the Sabbath. You will also find that the Feasts of Israel that we observe will be very informative to you. You will have a much better understanding of God’s prophetic and chronological order in these following feasts:

These are some of the reasons why we welcome you to come and visit and partake of the richness of our faith as we study the Bible through Jewish eyes. Please see meeting dates and times on our home page. 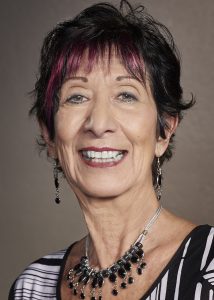 God called Barry and Violette into full-time Jewish ministry. They served together in Jewish missions for 38 years. In addition to her position as a staff writer for CJF Ministries, Violette continues coordinating the messianic fellowship, Tikvah BaMidbar (Hope in the Desert), she and Barry started in Phoenix, AZ. It serves as an outreach from the local church into the Jewish community, also enlightening Gentiles, by teaching and sharing the Jewish roots of Christianity, the feasts of Israel, and Israel in prophecy. Violette receives referrals to witness, counsel, speak and teach women’s Bible studies and discipleship classes.

Violette Berger was born on Chicago’s northside to Greek parents. (Her parents emigrated from Sparta, Greece.) Violette’s religious upbringing was kept in the Greek Orthodox tradition. In addition to a public elementary school, she also attended “Greek School,” taking language and religion classes.

Violette graduated from the University of Illinois with a B.A. in English. She has worked as an editor, copywriter, Human Resource Director, and teacher. Violette met her late husband, Barry Berger, a Jewish believer in Jesus the Messiah, who shared the Gospel message with her. He introduced her to his pastor’s wife, who invited Violette to attend her Bible study. The Word challenged her, and as a result, Violette prayed to receive Jesus as Lord and Savior of her life in March, 1977.

Violette’s ministry imparts to her Gentile brethren her love for “the lost sheep of the house of Israel” and her burden and vision for reaching them for the Messiah.

David is a student of the Word and a gifted Bible teacher to whom God has given a burden to reach “the lost sheep of the house of Israel,” — the Jewish people — with the Gospel message. To both Jew and Gentile, he teaches the Jewish perspective of God’s Word and how God’s entire plan of redemption will be fulfilled through the Feasts of Israel, which point to Yeshua HaMaschiach, Jesus the Messiah.   David has been the primary teacher of Tikvah Ba Midbar Messianic Fellowship since the recent loss of its founder, Barry Berger, his messianic Jewish mentor and friend, but has served in a leadership role since 2006.

David prayed to receive Jesus as his Lord and Savior in 1997 at Caanan Missionary Baptist Church of Mesa, AZ. A co-worker had witnessed to him and planted the seed that came to fruition. David completed a three-year discipleship program through his church which focused on theology and evangelism, and also served as a deacon.

David met Barry in 1998, when Barry, who was a missionary for the Christian Jew Foundation (CJF Ministries) spoke at his church. Barry captured David’s attention when he asked the congregation whether they knew anyone who is Jewish. While the congregation pondered the question, Barry stated, “Jesus is Jewish!” David was led by the Lord to sign up for the program Barry created through CJFM. It was called JET (Jewish Evangelism Training). He found it to be a remarkable training program, consisting of the study of Jewish history, customs, beliefs, the Feasts of Israel, and how to share one’s faith one-on-one from a biblical Jewish perspective.

David’s call to Jewish ministry was sealed while reading the account of Yeshua’s death on the cross. The Lord revealed to him, “The Jews didn’t kill Me. I laid my life down. Go love them!”

Although maintaining a full-time job, David has also been a group leader and teacher in the churches he has attended through the years and a guest speaker at churches in northern Arizona and throughout the Valley. He and his wife, Ann, currently attend Desert Springs Community Church in Goodyear, AZ.

David and Ann have been married for 33 years and, having the same love and burden for Israel, serve together at Tikvah BaMidbar.

If you would like to make a donation to Tikvah BaMidbar, make a check out to: Church of the Good Samaritan and mail it to: